The Centre For Fun Maths was founded in 2011 by Svetlana Goranova and Galya Pencheva. It is an innovator in extracurricular math activities thanks to its Fun Maths methodology. The two founders have graduated from Sofia High School of Mathematics, their teacher being Mrs Rumyana Karadzhova, a long-standing favourite teacher of maths in the high school.

Inspired by maths, Svetlana and Galya dreamt of carrying on with their favourite science. Svetlana obtained a Master’s in Mathematics in Germany, while Galya got a degree in aviation engineering. Svetlana took part in the Erasmus for Young Entrepreneurs programme at the science museum (Scientific Imaginary Science Centre) in Trieste, Italy, which helped her develop the idea for setting up the centre. After returning to Bulgaria in 2010, Svetlana and Galya met and together they set out on the creative journey of fun maths. Galya graduated with a Master’s in Primary School Pedagogy, and in 2011 she and Svetlana jointly established the Centre For Fun Maths Ltd. They began to craft by themselves the Fun Maths methodology for children from the age of four to second grade. In the course of three years, the centre gained momentum and started to offer a year-long programme for extracurricular activities for children of preschool age to second-grade level. The centre worked with a number of state schools as well as with the Victor Hugo School in Sofia, the German School with the Embassy of Germany, and Pythagoras Primary School with the First Private High School of Mathematics. The organisation’s focus was gradually shifted to private centres working on the weekend, where the activities in maths could unfold their full potential. In 2014 Galya left the organisation, and Svetlana became fully in charge.

We are proud of our wonderful team’s contribution in the prestigious FameLab competition, organised by the British Council. In 2013 Galya Pencheva became a FameLab winner in Bulgaria. Galya managed to enthrall the jury and the audience by showing that maths can be interesting and accessible to anyone. In 2014 Marina Marinova from the Centre For Fun Maths won a second place in the same competition. Since then, at least one teacher from our team is participating in the contest nearly every year. In 2018 Bozhidar Madzhurov has won an Aurubis Bulgaria special award.

In 2017 the Fun Maths methodology expanded beyond the borders of Bulgaria. The centre’s first international partner is Prospera Education Hub in Chisinau, Moldova, where our methods are taught in Russian and Moldovan.

In 2017 the Centre For Fun Maths also became a main partner of the Erasmus Plus K2 project Maths and Motion; as of 2018 we are a main partner of the REFRESH project which aims to promote scientific contribution by means of various events across the country, including The Night of Scientists initiative in 2018 and 2019.

In 2018 our organisation was selected within the framework of the SAP Social Sabbatical Pyxera Global programme. As a result of the cooperation of the SAP consultants, our centre succeeded in reaching some of its major objectives for higher sustainability.

Last but not least, we are very glad that for a fifth consecutive year we are special participants in the annual Sofia Science Festival, organised by the British Council. 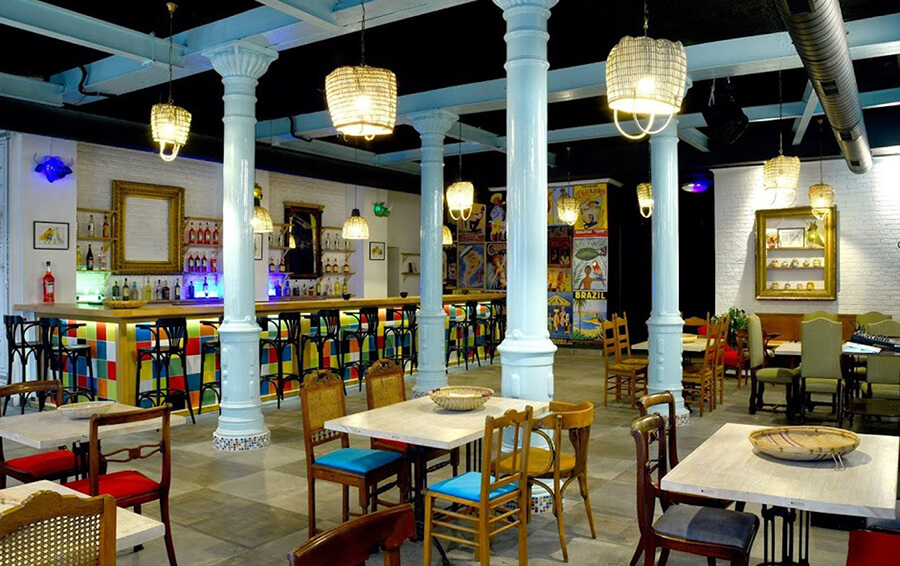 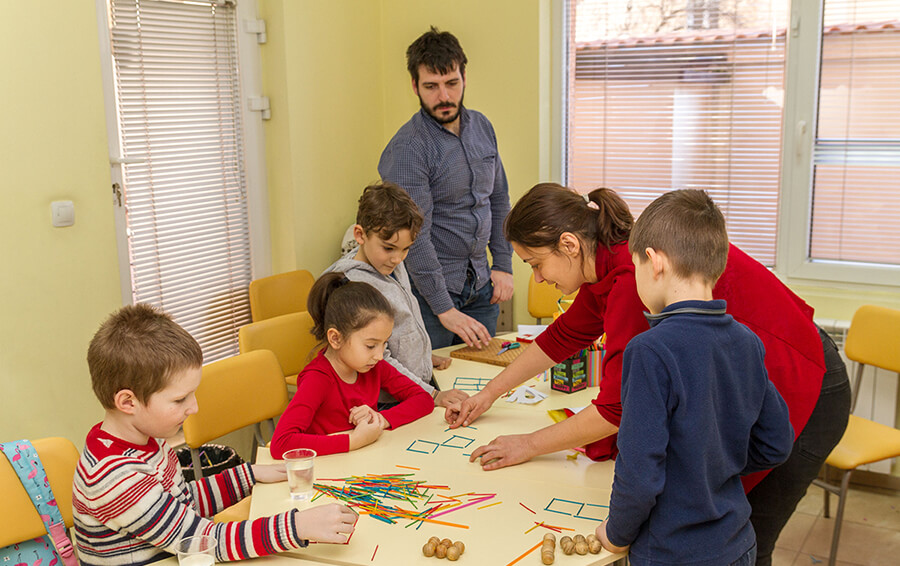 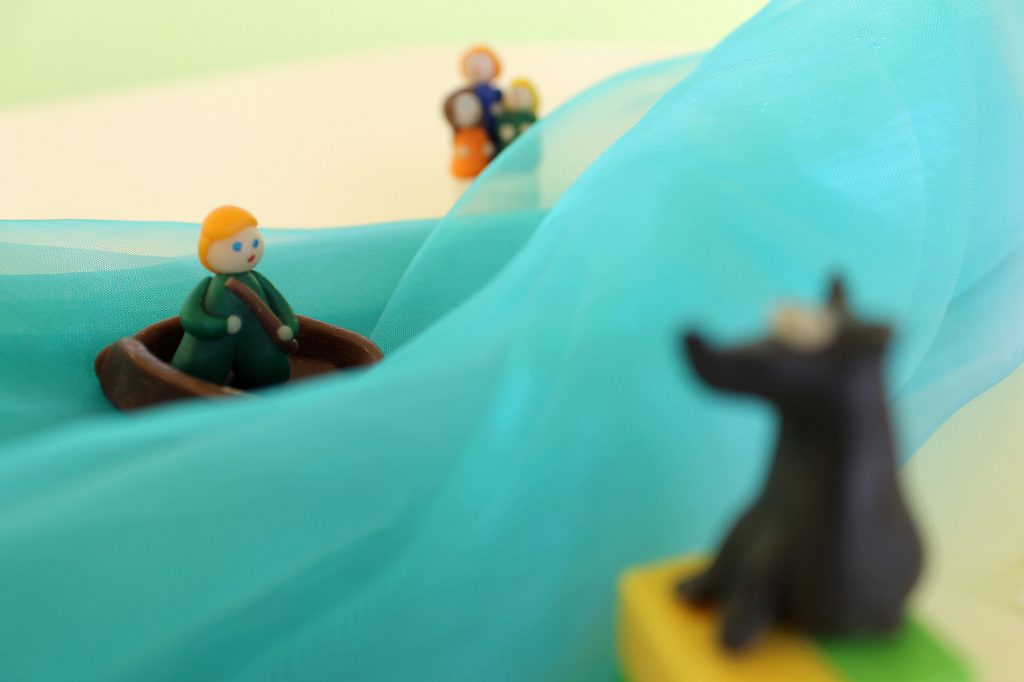 MATHS IN NATURE AND ART

This module provides a close look at the beauty of forms in nature and art, as well as at the relationship between mathematics and the surrounding world. Children will learn about the different types of symmetry, the Fibonacci numbers — an extraordinary sequence of numbers that “appears” in unexpected places in nature, the world of the bees and the way nature has found the optimal forms. Children will also explore vivid examples of mathematical art, such as Escher’s drawings and Penrose’s mosaics, and then create their own works that will incorporate concepts and ideas from mathematics.

This module contains an extremely wide variety of logical tasks and conundrums that challenge children and make them look for non-standard solutions. The module includes tasks from the treasury of Bulgarian mathematical folklore, the history of mathematics, coding, two-dimensional and three-dimensional puzzles, paper transformations and many others. The activities are presented in a non-standard and intriguing form, such as a treasure hunt, puzzles or spy games. This approach captivates children and makes them meet math challenges with enthusiasm.

The Fun Geometry activities serve to present and explore the basic geometric forms, as well as develop spatial thinking and orientation. Through games, creative tasks, and experiments, children discover geometric relationships and transformations, develop their power of observation, unleash their imagination, move from the plane into the three-dimensional space, make their own measurements of and discoveries about the outside world. In our work in this module we successfully apply the Open Geoboard geometric boards.

FUN ARITHMETIC
The main goal of the activities in the Fun Arithmetic module is the formation of a positive attitude towards the numbers and confidence in operating with them. The game approach and specially prepared teaching materials are used that are very attractive to children: a funny circle of numbers, Mr Plus and Mr Minus’s block, scales, and for older children: digital rebuses and puzzles, ancient mathematics, challenges that make students imperceptibly apply and practice their skills in basic mathematical operations.